Shiren the Wanderer: The Tower of Fortune and the Dice of Fate Review 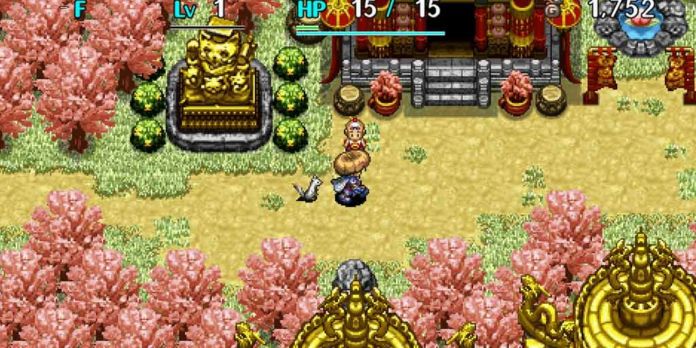 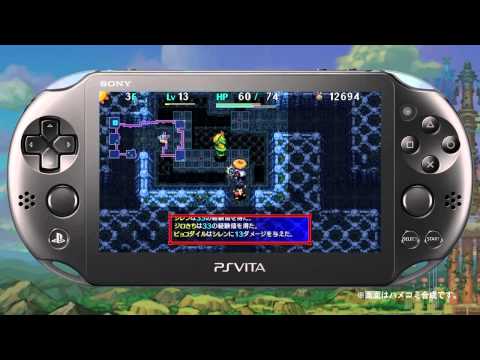 What happens when you lose all of your health in basically any RPG? You are probably met with a GAME OVER screen and told to restart your save from your last point. However, what if it wasn’t the checkpoint you saved at, but the very beginning of the game? All of a sudden, your level 21 is put to 1, and you lose every bit of money and equipment you once had.

This is the world of roguelike RPGs, and Shiren the Wanderer: The Tower of Fortune and the Dice of Fate stands out as a prime example of this awesome yet unforgiving genre.

Shiren the Wanderer is well known in Japan and is celebrating its 20th anniversary like many other series this year. The games follow a silent protagonist by the name of Shiren and his pet weasel who embark on the most dangerous and epic adventures.

Originally released in 2010 on the Nintendo DS in Japan, Shiren the Wanderer: The Tower of Fortune and the Dice of Fate is an upgraded version designed for the Vita. It is not a sequel, but a remake that greatly improved the gameplay mechanics of the original.

So how does Shiren the Wanderer: The Tower of Fortune and the Dice of Fate stack up against other RPGs and titles out there? 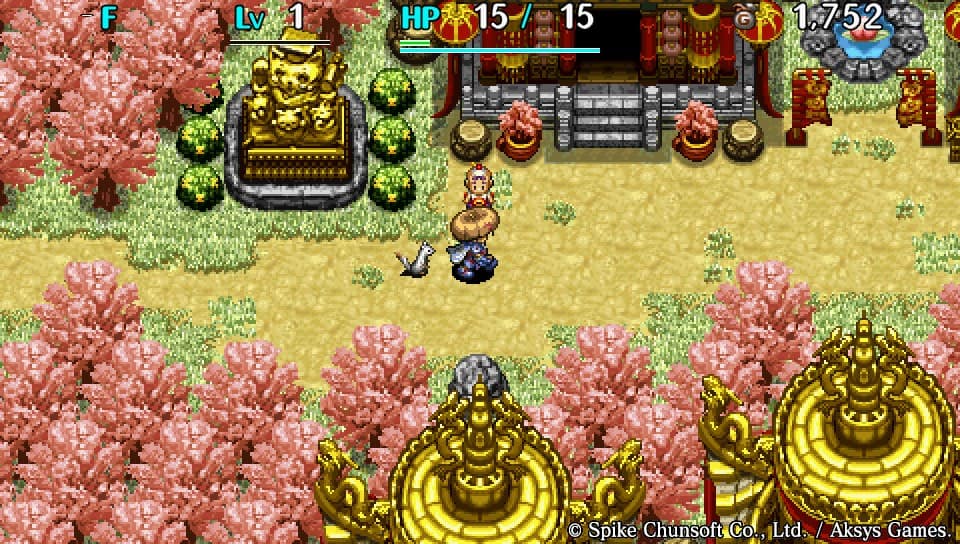 There’s a rumor that if one successfully climbs the Tower of Fortune, that they can change their fate. However, the path to the tower is a dangerous one. Will the gods accept your challenge?

The story of Shiren the Wanderer for Vita has a very interesting premise that the player must unfold, dungeon after dungeon. Taking place in the small village of Inori, Shiren and his weasel companion Koppa take on their next adventure, to challenge the god Reeva.

Players do not have to have knowledge of the previously released games to pick up this title.

The world of Shiren the Wanderer is very charming and is very reminiscent of old school RPGs, from the epic adventure to overall feeling when experiencing the game.

Imagine your favorite classic RPG: the setting, world, story, and characters that make it alive. Shiren presents this charming and potentially-nostalgic world and setting to the player, making it stand out from more modern RPG settings. NPCs have interesting personalities and dialogue, both human and non-human characters alike.

Is it more in depth than other RPGs out there? No. However, the charm and happy feeling you get while walking around the villages is one of a kind.

Shiren also has an array of characters in the world that may even be willing to help you out on your adventures. Tao, for example, is an awesome guide at the tower who can later be hired as your companion. Jirokichi, on the other hand, is a very interesting character who wants to face fate to save his girlfriend Oyu from a terrible illness.

Shiren the Wanderer looks, sounds, and feels exactly like an old school RPG.  However, considering the 3D Wii game and the Vita’s graphical capabilities, it could have had more updated graphics. There is something so charming about the pixelated, old-school graphics though that makes it special. The character designs are really nice, and I would have loved to see full portraits in game. 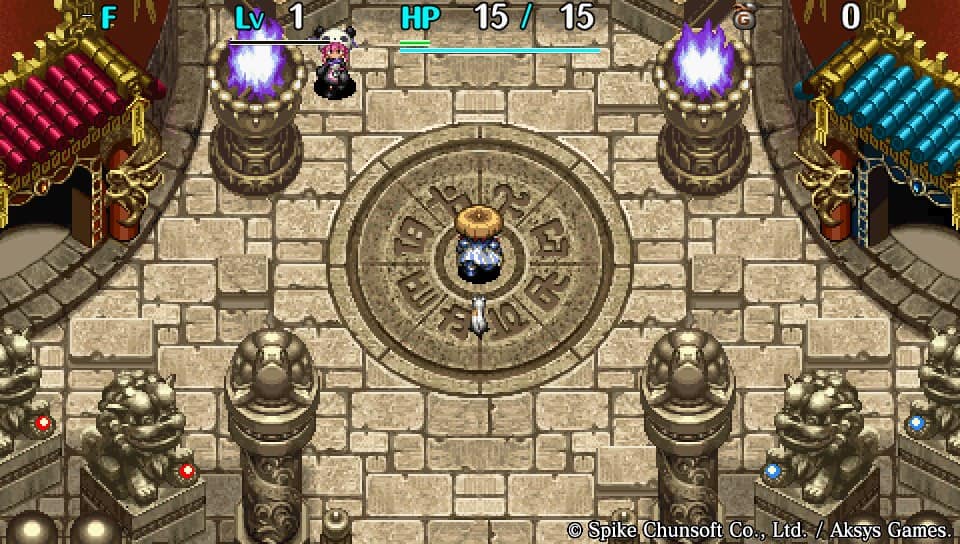 Dungeon crawling can take many forms and it is the most important part of the Shiren games. As part of the Mystery Dungeon game series, Shiren follows the same pattern/style of gameplay. Players must trek through randomly generated dungeons. However, combat is turn based and is dependent on movement and steps taken. Each step/action is a turn, and players are expected to use an array of items to their advantage. Items can be anything from scrolls that can be read to inflict status ailments on enemies to food to replenish your fullness. Players can also utilize a variety of weapons, from magic staffs and swords to help with fighting.

Combat is in real time as well and monsters will attack as frequently as possible. The best part of the game was running through the dungeons, especially since leveling up occurred so frequently. The monster sprites were cute, and I absolutely loved using all of the items at my disposal. Like all of the Mystery Dungeon style of games, combat is fast, fluid, and fun. Like I mentioned above, leveling up is super easy. What isn’t easy, however, is how the game is presented.

As mentioned before, Shiren the Wanderer is a roguelike RPG, which is not your typical experience. If you lose all of your HP in a dungeon, you don’t get a simple game over. However, you are thrown out of the dungeon sent to Inori village’s hotel, with a catch. You lose everything. Yes, everything. From your levels to items to money, you literally must start from the beginning of the game again, losing all progress you have made.

By this description, you can probably guess that this game is a bit difficult, and it is. However, there are measures to help you out on your adventure. For example, Inori village has a bank and storage system in which you can place your most precious items for future use.

So if you are brought back to the village, you can still get your items from storage despite losing everything before that.  There also is an interesting multiplayer feature implemented into Shiren. If you die, you can wait for someone to rescue you, either with the game OR online. You cannot continue, however, until someone helps you out. This is a real cool feature, but if no one comes to your aid, you are on your own or forced to restart. These features are nice and unique, but it does not really combat the difficulty of the game.

I was on top of the world, almost making it through the first part of the tower with my companion Jirokichi. I was cruising through the dungeon with my new pal, ready to take on the world and whatever boss came my way. Reaching a room with 5 enemies, I decided to take them on, soon realizing it was a mistake. Soon enough I fell. Then, I lost everything…

Not only was I frustrated, I then realized that the game became even harder the second time. When I first started out, I had over 2,000 G, awesome items/armor, a companion, and a decent level. My second time around at the same place, I had close to 500G, barely any weapons, and Jirokichi was nowhere to be found. It almost made me want to erase my save file completely and legitimately start from scratch.

Another thing is that although you can save in dungeons, you must “abort” the adventure. This means you have to manually go into the menu to exit and the game saves exactly where you are. Don’t close the Vita application or shut your system off, because you will regret it. If you do that, the game treats it as if you collapsed. So this means that you must start from scratch just from not exiting the game properly.

As you may see, Shiren is not a game for everyone. Hardcore gamers will absolutely love the challenge, while casual gamers may find it too frustrating to pick up again. I’m in the middle, frustrated but absolutely loving the combat gameplay.

Shiren is super charming and a delight to play. The story is interesting, the characters were awesome, and the gameplay is super addicting and fun. However, the game has limited accessibility to those who want to just experience the story with its unforgiving saving/progress methods. It is gameplay heavy and does require dedication to complete.

Recommended for: Hardcore gamers or those who favor challenging dungeon crawling gameplay.

Previous article
I am Setsuna Review
Next article
A Game of Thrones: The Illustrated Edition Pre-Order Now Available