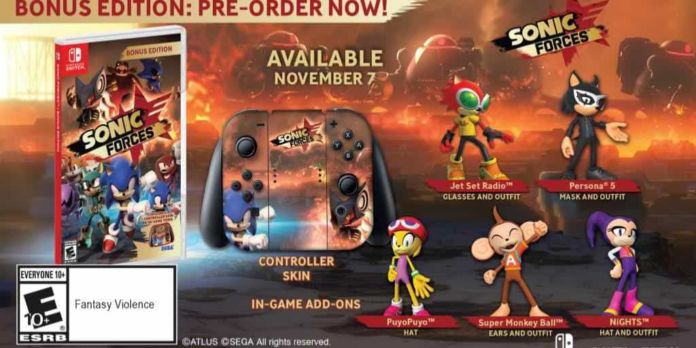 Sega has announced that Sonic Forces will be released come November 7, 2017 on PS4, Xbox One, and PC. With this also comes the presentation of bonus content if you pre-order the game. Pre-orders can be found at online retailers like Amazon, Best Buy, and GameStop. The bonus content currently includes fives costumes for your Hero Character. They are from Jet Set Radio, Persona 5 (Phantom Thief), Puyo, Nights, and Super Monkey Ball (AiAi). 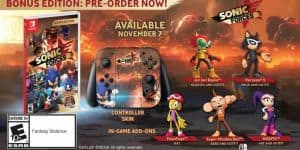 If you’re a fan of the old school Sega games, these costumes are sure to inspire the perfect Hero for your game. There is also a controller skin included, which is probably not the best design I’ve never seen.

The skin is mostly a smaller version of the cover art, featuring Sonic and the apparent villain of the game that isn’t Dr. Eggman. As something you might be looking at everyday for the rest of your life, you have got to love Sonic Forces a lot to put this on your controller. Granted, it gives the Nintendo Switch controller some much needed colour, but there are better choices out there. Custom ones, where you can pick the image.

That said, after the success of Sonic Mania (though made by a completely different development team), I have high hopes for Sonic Forces. Who knows, this just might be the 3D update Sega has been trying to achieve since Sonic Generations. It has certainly been a rocky road for Sega before Sonic Mania, with very few of their recent releases living up to fans’ expectations.

Though the title that deviated the most from the Sonic formula, was Sonic Chronicles: The Dark Brotherhood. This game was developed by BioWare and it sure showed it. Turn-based combat and plenty of story and worlds to explore that had RPG written all over it. I admit it was good time, but it wasn’t Sonic by any stretch of the imagination. Sonic Forces will hopefully do better.