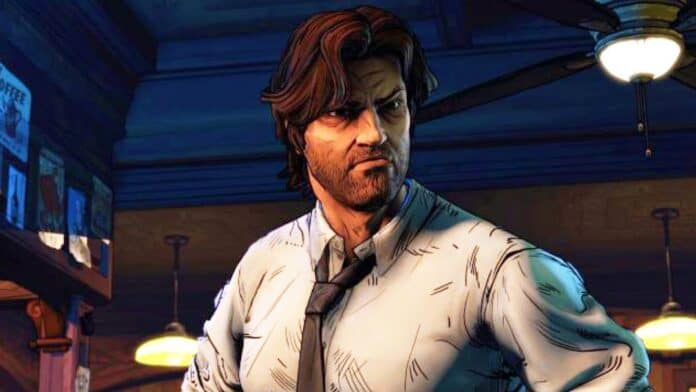 Telltale’s unique and distinctive style for episodic choice-based games put them on the map and carved out a new and incredibly popular genre that gave a whole new meaning to narrative focussed gameplay.

Though the company enjoyed modest successes initially, it wasn’t until the company released The Walking Dead season one in 2012 that they became established. For many gamers, Telltale’s The Walking Dead was their first interaction with the studio and it created a legion of diehard fans excited to see more.

The Wolf Among Us followed in 2013, and since the first episode was released in October, the game received rave reviews and a sizeable cult following. Its 80s neo-noir feel provided the perfect neon-lit back-drop to the murder investigation narrative and exaggerated the darker elements of the game perfectly, not to mention the heavy and visceral soundtrack crafted by Jared Emerson-Johnson.

In 2017, a sequel to the Fables comics prequel was announced by Telltale but the studio’s surprise and immediate closure brought an end to everything in production, making their announcement ring hollow.

It would be another two years before we heard anything regarding the game, and with LCG Entertainment doing business as the new Telltale, they announced they had the rights to the Wolf Among Us. With season two of the game entering production earlier this month, it felt apt to have a look at the five things that season one left unanswered that can be resolved in the new series.

After devoting pretty much my entire weekend, save the time I took to make a lasagna, to play the series again, I’ve picked out the 5 key things in the game that need clarifying. From the unresolved cliffhangers to the character who kept mysteriously cropping up in episodes without so much as an introduction, like Bigby Wolf, I need answers.

For the purposes of this article we will only be analyzing the events of the game, as many fans of the game haven’t necessarily read the comics and, for all we know, the Wolf Among Us Season 2 will continue to take place before the comics’ timeline or ignore the source material altogether.

Is Nerissa actually Faith in glamour or is Faith Nerissa in glamour? 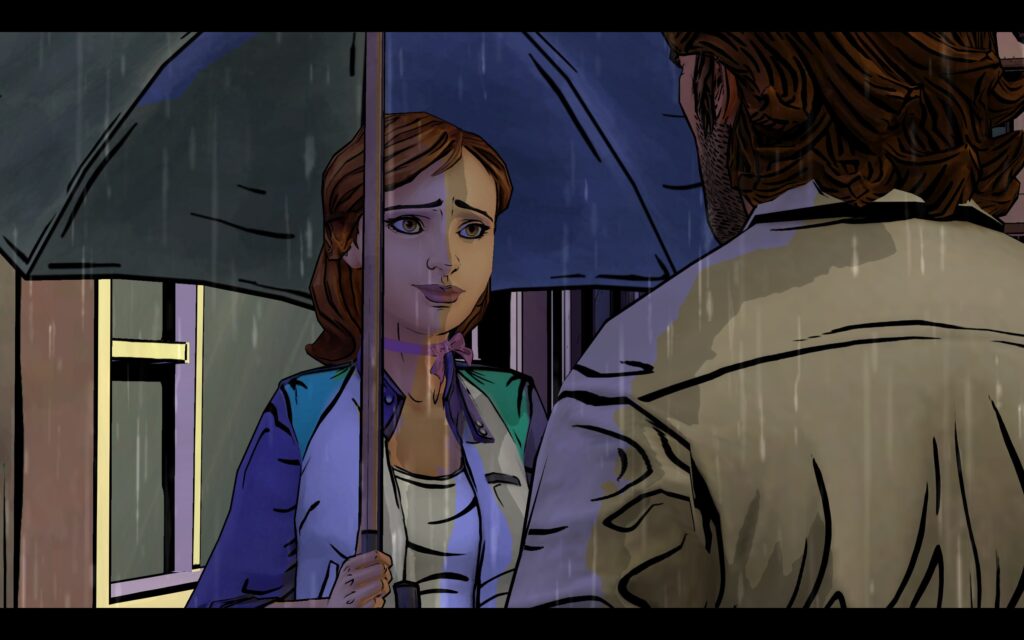 This is probably the most obvious question that needs answering. At the center of the story is the character Faith aka Donkeyskin aka Assskin (I couldn’t resist, sorry) and it’s her murder that sets the wheels in motion for the rest of the game; it’s pivotal. However, through various hints and clues such as Nerissa and Faith have the exact same bag and saying the same or similar things to Bigby Wolf it’s largely left ambiguous. Something is up.

Not to mention when you consider the circumstances of Lily’s death, dying whilst in a glamour meant to look like Snow White with her severed head left on the doorstep like Faith’s the night before. The fact that Lily’s death appears to be identical to Faith’s, save the fact she was in glamour is an obvious indication. Further evidence is the Magic Mirror’s inability to show us where Faith is despite being able to show the dead body of her father, his excuse? ‘these lips are sealed’.

But which way is it? Is it Faith glamoured to look like Nerissa or the other way around? It seems as though the game wants us to think it’s the former of the two options but there’s ample evidence for both theories. Alas, nothing is concrete and I’m going grey just trying to figure it all out!

What is the relationship between Snow and Bigby? 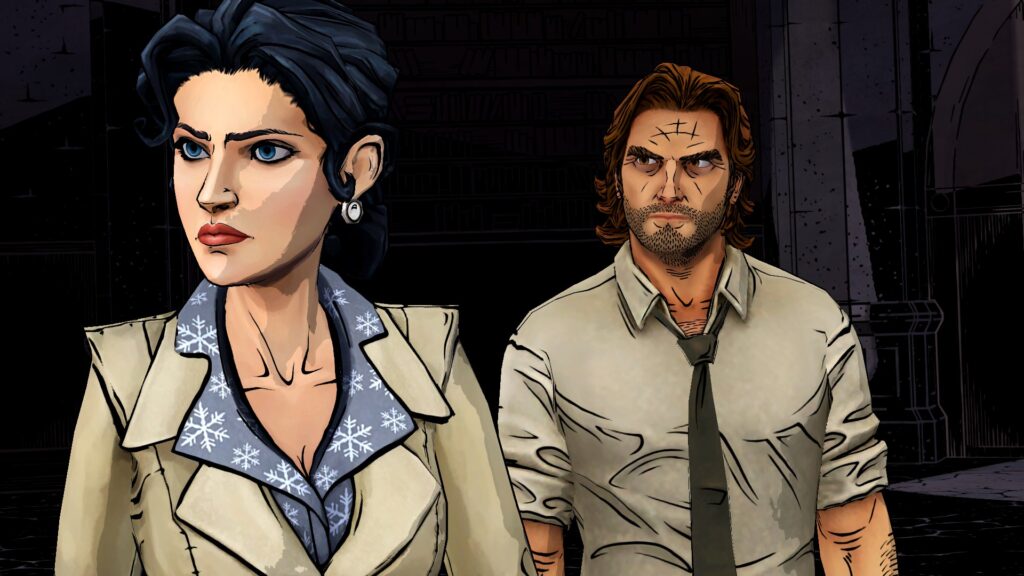 Within the first act of the first episode, we’re told via Colin the un-glamoured smoking pig in Bigby’s living room, that Bigby has feelings or at least a soft spot for Snow and in the Fable history unlocked in the games’ extras we know that Bigby saved Snow in the Homelands. Throughout the first season, players have the option to say things to Snow that hint at Bigby’s feelings towards her, especially at the beginning of episode four after Bigby has been patched up by Doctor Swineheart. But by the end of the last episode, regardless of whether players have decided to try and pursue Snow in this way or not, the relationship seems to be changed by the events of the Crooked Man’s trial. There’s a noted distance between the characters, so much so that Bigby himself comments on this when talking to Nerissa. It could be that Snow is busy after taking over Crane’s role as Deputy Mayor and once she hires an assistant to replace her old role the relationship might go back to what it once was, in that case, I think Beauty’s looking for a job. But the noted distance between them highlights that there is more to this than a simple employee reshuffle.

Could it be that Snow is wary of the popularity Fabletown’s Sheriff? She certainly wasn’t a-okay with the fact that the Crooked Man’s fate was left to him. Perhaps this is the precursor to a power struggle in Fabletown, especially if players chose to make Bigby nicer to those characters like Mr. Toad and Colin about getting glamours in contrast to Snow’s ‘by-the-book’ character.

What happened to Crane? 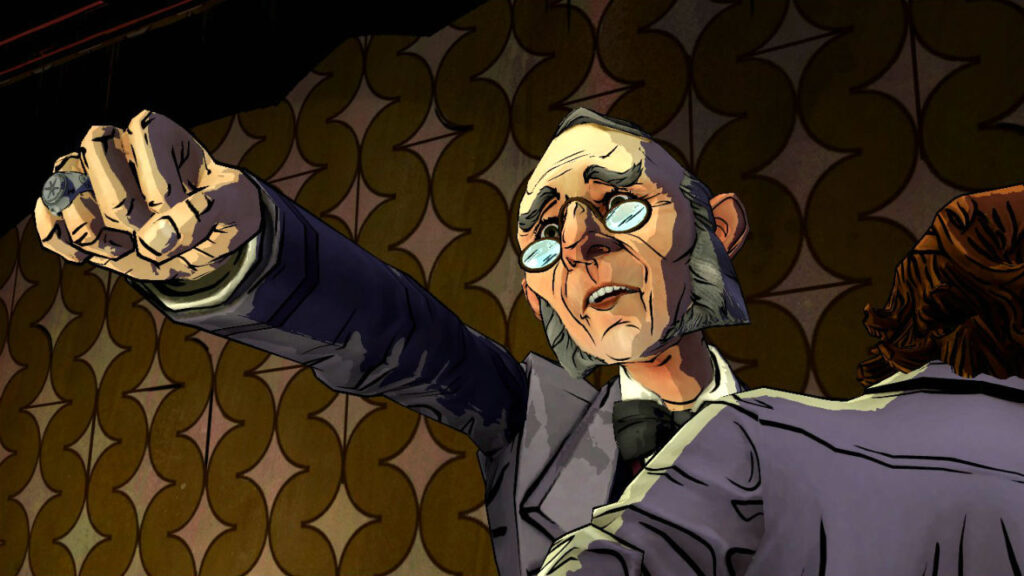 Ichabod Crane had a distinctive demeanor, to say the least, before we even meet him we know he’s going to be a handful. We also know that Bigby and the ex-schoolmaster of Sleepy Hollow turned Deputy Mayor of Fabletown rarely see to eye to eye, personally I’m in Bigby’s corner. In episode two we find out he’s not only obsessed with Snow White, he’s been re-enacting fantasizes with Lily in a glamour of the fairest of them all, well at least the mundy version of the tale. At best he’s hypocritical, believing all Trolls should have been left behind in the Homelands despite Lily being one, at worst he’s a corrupt politician at the beck and call of The Crooked Man, either way, he’s a character that everyone hates.

But where on earth did he go after being captured? The last players see of him is when Bloody Mary orders him, at the behest of The Crooked Man, to skip town and flee to Paris. But we never actually see him head to Paris, let alone get on a plane. Could the character return, or will he spend the rest of his days living in fear, unaware that the Crooked Man is either died or been arrested?

Where is King Cole?

He’s mentioned a few times but only in passing and in the same breadth of being mentioned the player is told that King Cole is away. But that’s all we are told, where has he gone? did he decide to find himself on a trip around the world? If he’s not around how can he still be classed as the Mayor of Fabletown? If the events of Fabletown in the first season of The Wolf Among Us did not warrant a visit, what does? Snow’s appointment as Deputy Mayor at the end highlights that he is aware of the events but he still refrains from visiting the people of Fabletown.

We know little of his character but his insertion into season two’s narrative could create an interesting shift in the dynamic between Bigby and Snow, in large part because he’s the only character that has the final say. From what we can gather, he’s in no rush to come back.

Who is the red-haired man?

He’s tall, has red hair, and shows up at multiple points in the story, enough for me and other players to feel as though there’s more to him than meets the eye. There are a number of theories regarding this character, some fans brush him off as an example of Telltale reusing the same character model whereas others note the fact that he’s wearing a tie with a shepherd’s crook on it, implying he could be the Boy who cried Wolf. If he is, perhaps he’s biding his time before exacting revenge on Fabletown’s Sheriff. It stands to reason that it’s odd to have a character that apparently doesn’t mean anything first appear in a scene greeting Snow White, turn up when Bigby is chasing Tweedle Dee, appear in the queue outside the Business Office not once, but twice and then be the driver of a Taxi that Bigby uses. After playing the entire series in one go, it feels careless to brush this character off simply as a reused character model and if it is the Boy who cried Wolf, what is he up to and why didn’t Bigby recognize him?