When it comes to big, dumb movies, Godzilla: King of the Monsters is the biggest and dumbest of them all. It’s a loud, awe-inspiring spectacle that feels conjured up from the mind of a sugar-fueled 9-year old. This giant, radioactive reptile doesn’t care about character development, filling in plot holes, or even the franchise’s own legacy. Godzilla: King of the Monsters is the cinematic equivalent of furiously banging your action figures against each other. Sure, it’s silly nonsense most of the time, but the sheer confidence in displaying this kaiju on kaiju violence is exhilarating.

The third entry in the “Monster Universe,” Godzilla: King of the Monsters picks up a few years after the 2014 movie. Monster research organization Monarch is now monitoring 17 giant beasts – now called titans – while attempting to persuade the government that some of these creatures are not a threat.

Things get complicated once a group of eco-terrorists captures Monarch scientist Dr. Emma Russel (Vera Farmiga) and releases the titan known as King Ghidorah. Setting off a chain reaction that awakens all the other titans, who begin causing havoc all across the globe. This forces Godzilla to step in and beat the hell out of Ghidorah to assert his dominance, calm the titans, and save the planet.

Kyle Chandler is on hand as Emma’s ex-husband Mark, Ken Watanabe reprises his role as Dr. Ishiro Serizawa, and Charles Dance plays the head eco-terrorist. They’re all varying degrees of forgettable, with most of the family drama revolving around Mark, Emma, and their daughter Madison (Millie Bobby Brown) being the worst offender. Even though the actors give it their all, King of the Monsters’ weak script doesn’t offer much emotional weight. It’s all very familiar and even a series of emotional twists can’t salvage their characters from being utterly boring.

Dance doesn’t get off much better, as his motives and ideology ends up being exactly as predictable as you’d imagine. He’s simply a catalyst to get the big kaiju fights started and is dropped entirely once the third act rolls in. Serizawa gets the bulk of the heavy, dramatic dialogue and Mark serves as the audiences POV throughout the events. Watanabe delivers a terrific performance, giving a real gravitas to the events and how we view the monsters. Yet, it’s ultimately undermined by King of the Monsters’ desire to shove as many monsters on the screen as possible.

Millie Bobby Brown is certainly the best of the bunch, portraying a young girl who is emotionally torn between her mother and father. Her reactions feel genuine and Brown really shows off her acting chops in one scene early on. I do wish she was our main POV character and not her dad. Brown brings a confidence that’s desperately needed among the human cast. Yet, King of the Monsters rushes throughout her character arc too fast, not allowing us to really connect with her. She does an admirable job with Madison, but it’s clear that Godzilla has other priorities.

Perhaps the biggest sin in King of the Monsters is how it frames the use of nuclear warheads. Historically, this franchise has been very much about the dangers of using nukes or other human instruments of war. Yet, the movie goes out of its way to be surprisingly “pro-nuke.” It’s a weird stance, that’s only heightened when thinking of the movie’s larger message of harmony. Godzilla is too concerned with showing off its elaborate bestiary than maintaining any sense of story consistency. But when the kaiju do wander onto the screen, everything stops and it becomes a spectacle only rivaled by a few other action movies.

Director Michael Doughtery lovingly frames these beasts as nothing less than gods. Each of the four principle kaiju – Godzilla, Rodan, Mothra, and Ghidorah – feel cataclysmic in both size and power. From Mothra’s haunting beauty to the sheer, firey rage of Rodan, each of the monsters are fully realized. There is some stunning cinematography on display that wonderfully captures the sheer awesome power of each kaiju.

Watching Ghidorah light up an entire city with lightning bolts is easily one of the coolest things to be put on the big screen in years. They’re visually stunning and look terrific in motion, especially during Rodan’s emergence from an active volcano. It’s clear that these beasts are the core focus of King of the Monsters, with both Godzilla and Ghidorah getting the most screen time. 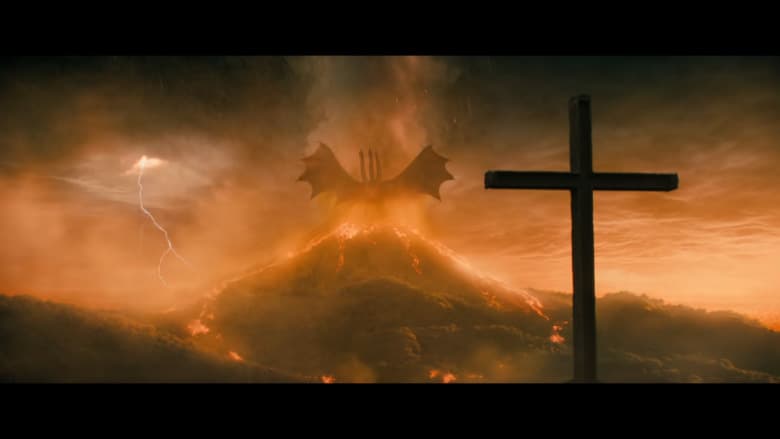 Battles are chaotic, with each of the main kaiju’s having multiple cheer worth moments. Doughtery does a great job framing a lot of the action, allowing us to see every bite, scratch, and laser beam fired. They’re exhilarating, especially once the final battle begins, but it’s clear that this is all Godzilla: King of the Monsters really has to offer. If you aren’t going to see these city-scale prize fights than you’ll probably not enjoy this movie. However, if your sole purpose for seeing the new Godzilla is to watch them thrash one another to death than this film will be perfect for you.

Godzilla: King of the Monsters is a film that’s at war with itself. The movie has a ton of structural and character issues that would weigh down lesser films. Almost all of the human characters are one dimensional and the movie is riddled with cliches, yet it all feels appropriate. These monster films have rarely been anything more than hot, B-movie nonsense, but that’s what makes them great.

When it all clicks, King of the Monsters is a powerhouse movie that embraces the best parts of the franchise’s legacy. If you’re looking for something deeper than Godzilla will certainly disappoint, but if you’ve wanted a glossy, polished, big budget kaiju than this is the film for you.