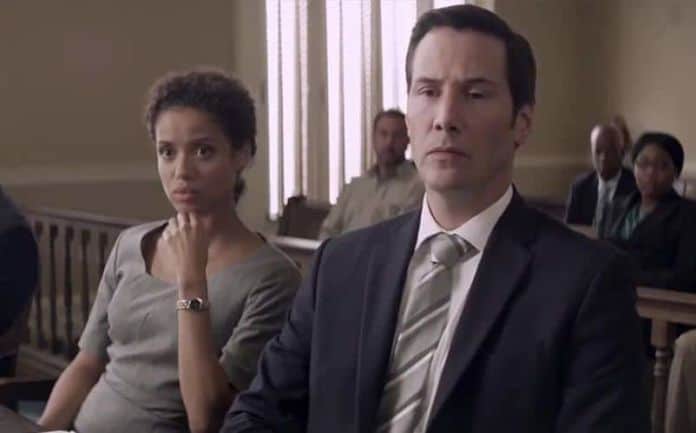 **Spoiler Warning: This The Whole Truth review may contain spoilers.**

Courtrooms seem like a natural fit for cinema thanks to their usually tense moments, highly emotional testimonies, and the chance for shocking revelations to come forward. Yet, with the exception of a few notable films we never seem to get them right and most of the time movies like these outstay their welcome rather quickly. The Whole Truth, directed by Courtney Hunt, aims to give this setting a shot in the arm with adrenaline. However, The Whole Truth ends up being a mixed in terms of quality and intrigue, leading to just another mediocre film. 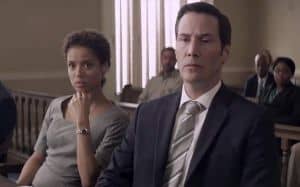 Our story follows Louisiana defendant Ramsey (Keanu Reeves) who has taken a case where his young client Mike (Gabriel Basso) is accused of murdering his father Boone (Jim Belushi). However, Mike is refusing to talk and Ramsey is saddled with rookie lawyer Janelle (Gugu Mbatha-Raw). The case itself seems unwinnable and it’s up to Ramsey to figure out how to save his client’s life. This story is peppered with a variety of flashback sequences that try to add context to the nature of the crime and events leading up to it.

While this sounds like a good base to an interesting story, the pacing during both the first and second act drag the plot heavily. This is due to the fact that the climax is obviously going to be the juries verdict, so we are then forced to sift through a plethora of testimonies, evidence, and the jury looking quizzical at our lawyers. Most of this is used to try and keep the audience guessing as to what exactly happened, but the problem is that almost every character in this film is utterly unlikable.

The Whole Truth portrays almost every person, with the exception of Janella, in some negative light or context. Yes, this is true to reality, but it doesn’t allow audiences to latch on or even root for a single character’s outcome. By the end of the movie I just didn’t find myself caring about Mike’s outcome, even after an actually well written final twist. By having no central protagonist and everyone essentially reduced to different shades of awful, it robs the movie and any real tension of build up.

This sadly factors into Reeves’ performance which is mixed at best. Look, while I agree Reeves is a good actor (though a much better director) he really only works in certain roles. An emotionally demanding one is not it since is facial expressions range from bored to just plain confused. Now this is only enhanced by his dialogue which feels wholly cliche, predictable, and too a degree boring. Though his chemistry with Mbatha-Raw is quite good and barely saves his character.

In terms of the rest of the cast they are hit or miss, but Basso and Belushi are by far the best and have some great on-screen moments. Basso, in particular, gives The Whole Truth its only real emotional moments and it’s a shame his character really didn’t talk for the entire first half of the movie. Mike was a genuinely interesting character, whose motives made sense and feel more explored than anything else in the film’s plot.

However, the best aspect of The Whole Truth has to be the cinematography, as the lighting and camera work is masterfully done. Given they only had a few sets to work with, the amount of great shots and interesting use of darkness adds to the overbearing sense of dread. Sound design is also well-produced, as every creak and groan of the wooden courtroom are captured wonderfully. Best of all, Hunt decides to not add any annoying filters or gimmicks to the flashback sequences, relying on the audience’s own intelligence to determine what is the past and what isn’t.

Yet, The Whole Truth is still a fairly bland movie that feels like a slightly more expensive version of a Lifetime or USA straight-to-TV movie. This is largely thanks to terrible characters, slow pacing, and removal of any real tension or real stakes. Even though the final twist and general production for this film are great, it’s not enough to save it. We find the defendant guilty of being mediocre.