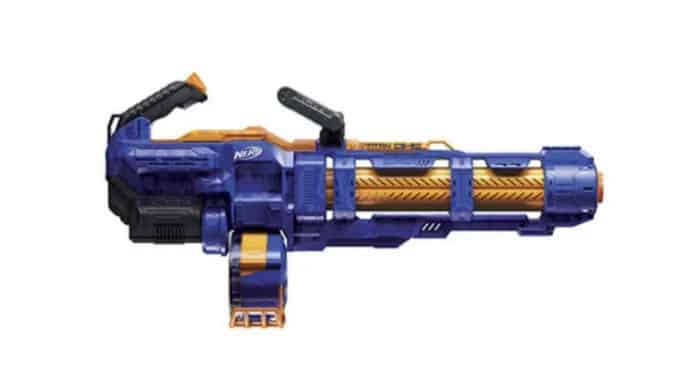 Take on the world with a Nerf gun capable of firing 50 darts without reloading. Blast targets moving or stationary with the power of the Nerf Elite Titan CS-50 and dominate any battlefield. This much firepower is sure to make you a force to be reckoned with.

The Titan CS-50 comes sporting a fully motorized firing mechanism and 50-dart drum. The spinning barrel adds a nifty layer of realism as you fire out each of the 50 official Nerf Elite Darts. Nobody will feel comfortable going up against you when you wield this unstoppable blaster. Even as they duck for cover, you’ll pummel them with darts – and all you have to do is keep your finger on the trigger.

Practice on all sorts of targets and use the motorized, rapid-fire blaster to take on mobile target. Simply power up the Titan CS-50’s motor, pull the trigger, and watch as a steady stream of darts peppers the battlefield. The barrel spins with each shot to feed individual darts through the muzzle. No matter how fast your opponents run, you’ll be able to chase them down with this fast-firing Nerf blaster.

It’s not easy to wield one of Nerf’s most powerful blasters, so the Titan CS-50 comes with a shoulder strap. Gear up and sling the Titan over your shoulder to keep it in arms reach. When the firefight breaks out, your trusty blaster will be immediately available to return fire.

Swap out your clip with most Nerf Elite dart clips to change up your firepower or stick to the included 50-dart drum. Whatever your choice, you’ll be equipped with an elite blaster that can take on even the most well-equipped opponents. Batteries are required to make the Titan CS-50 work and give you the power of a motorized blaster. It’s available now for pre-order and it will ship in November.

Previous articleHarry Potter: Ollivanders Wand Pen Set – Available Now!
Next articlePennywise Candy Bowl
Bobby Bernstein
Bobby is the co-owner of Nerd Much?. Bylines at Heavy, Den of Geek, HiConsumption, and More! Like his nerdtastic tweets by following @Thirstiestgamer on Twitter..