The Joker From Batman: The Animated Series Egg Attack Figure 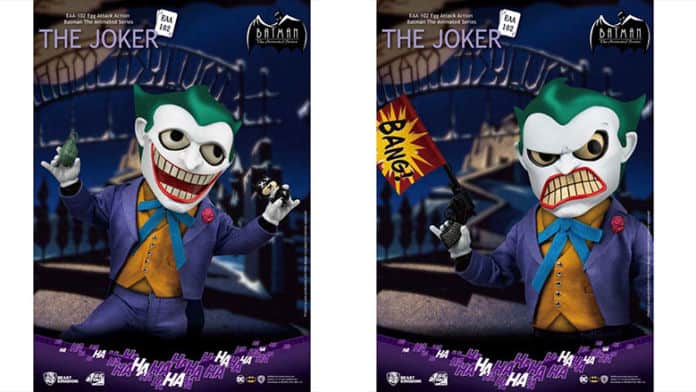 The antics of the Clown Prince of Crime are no laughing matter, but it’s hard not to crack a smile with this exaggerated Egg Attack action figure. The Joker from Batman: The Animated Series EAA-102 Action Figure depicts the cartoony villain, wielding a collection of his most hilarious pranks.

Who knows what the devious criminal mastermind is up to. You can’t even trust that this 6” action figure isn’t some sort of ploy to distract you while he wreaks havoc elsewhere in Gotham. It is a suitable distraction, with a real cloth costume that perfectly replicates his attire on Batman: The Animated Series, from the purple suit and green hair down to the poisonous lapel flower and stylish shoes.

The Joker reproduction is a versatile collectible that comes with 3 alternate heads with unique facial expressions, 4 interchangeable hands, a Joker grenade, a Batman doll, chattering teeth, a prank pistol, and a Joker fish. They may seem like toys, but in the hands of The Joker, they’re instruments of chaos. 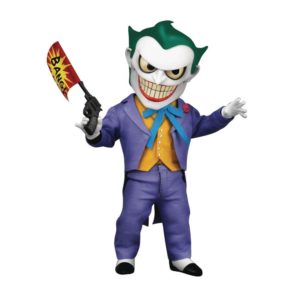 Give The Joker the tools he needs to keep up with his mayhem or change his devilish grin into a frustrated scowl. Change his mood to match yours or let him have his own personality, but don’t give him more trinkets than he’s packaged with. You never know what this version of The Joker is capable of pulling off.

The figure is posable and stands on an included black base sporting the Batman: The Animated Series logo and “The Joker” in white font. Add to your Batman collection with this fun The Joker action figure and give the Dark Knight something else to watch over when you’re out of the house.

Bring home a piece of the Batman: The Animated Series universe with the most mischievous figure that will ever grace your display case by picking up this Joker Egg Attack figure from the WB Shop.