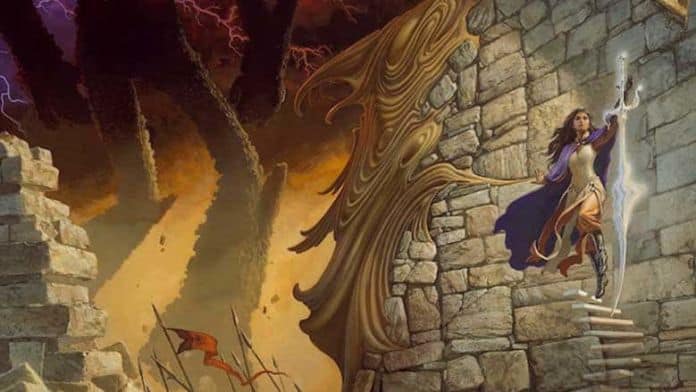 Brandon Sanderson is one of the most popular, award-winning fantasy authors of the moment. He is known for creating diverse and complex fictional worlds in what is known as the Cosmere series, which includes enticing strong female characters, internally conflicted villains, unclichéd romance plots, and unique new types of magic.

Sanderson made headlines recently with the release of Oathbringer in 2017, the newest novel in his The Stormlight Archive series, and Arcanum Unbound in 2016, a collection of short stories from the cosmere. DMG Entertainment bought the rights to Sanderson’s Cosmere novels in a film deal in late 2016, and is currently working to make a virtual-reality experience of The Stormlight Archive. Now is the greatest time to get into reading Cosmere, Sanderson’s epic fantasy series, so let us present to you a beginner’s guide to his books.

What even is “Cosmere”?

Cosmere is the universe that all of Brandon Sanderson’s novels and series take place within. Each novel or series takes place on a different planet within the cosmere, that operates based on different forces or “shards” that create different kinds of magic and motivations for its characters. The different novels and series are separate, but are related in subtle ways. There is one character named Hoid who appears in every book (although he often goes by a pseudonym and is easy to miss!), and sometimes characters from one series are referenced or appear in other series.

This interlinked group of fantasy novels can be intimidating to start reading, especially for literary commitment-phobes. There is a Cosmere timeline somewhere out there on the web, but even that is too daunting for us to point to. Luckily, we’ve put together a handy dandy guide to help you figure out where you should start reading, so you can make your own reading order as you see fit.

Dystopian Rebellions- If you listen to emo and punk music regularly, if you’re a rebel without a cause, if you love raging against the machine,if your favorite Harry Potter book is The Order of the Phoenix,  you will love Mistborn: The Final Empire– the first of the original Mistborn trilogy. It’s set in a dystopian dictatorship with a strict class system, and the lower class of “ska” are simply not having it. This is a really great, more mature version of dystopian teen rebellion stories like The Hunger Games and Divergent, with a lot more political commentary and insight into character’s conflicting motives. And if you really love it, there’s a wonderful board game called Mistborn: House War, so you and your friends can relive the first novel over and over again and create your own endings.

The romance in Mistborn is probably one of my favorites of all time. Brandon Sanderson has a way of building a relationship from the very beginning, giving you perspectives from both characters’ points of view- letting you follow as intrigue becomes friendship, as friendship becomes longing, and as longing becomes love. Then he grows even further as the two characters negotiate the power dynamics of their relationship, each developing their own identities and learning how to be with someone else. By the end, we see two characters that truly work together to make each other better. I won’t give more information to avoid spoilers- but it’s super refreshing to see a wonderful, well-written romance as a side-plot to enhance our understanding of two characters battling a number of forcers.

If you love fantasy but you’re tired of magic wands, dragons, elves, and potions, the magic in Mistborn will feel super refreshing. There are three types of magic that are all based in the concepts that certain metals contain magical properties, and certain individuals are able to use these metals to gain powers. The magic is extremely complex, and we learn more and more about the system throughout the two Mistborn trilogies.

The original Mistborn trilogy addresses faith in a refreshing and enlightening way, exploring a number of fictional religions, and showing the utility of religion, and times when faith fails. The third book shows a wonderful exploration of faith, gods, and philosophy that runs deeper than your typical fantasy novel, and is refreshing and relatable.

If you like strong female characters, you can read pretty much any of Sanderson’s books, but Vin really takes the cake for badass queens of fantasy worlds. She kicks ass. Vin defies most strerotypical female characters in literature- and is two separate female fantasies- the poor “cinderella” type of girl who gets to put on fancy dresses and do her hair, go to balls and flirt with rich boys, and the badass “Mulan” type who is small in stature but strong as all hell and able to take down an entire army. She’s empowering and super fun, yet still shockingly relatable.

The second Mistborn trilogy is basically a Western fantasy. If you like old westerns (like Clint Eastwood movies) OR modern westerns (like HBO’s Westworld) you’ll like these novels! It’s action packed police vs. outlaws, and the existence of magical metals definitely makes gunfights complicated, and more interesting!

Bands of Mourning has a very fun element of exploring lost artifacts, searching for magical talismans, and more. It;s basically a team of adventurers from different backgrounds- men, women, police, outlaws, poor people, and rich noblemen working together to find a legendary object that they’re not sure exists…before the bad guys do. It’s pretty great.

The second Mistborn trilogy is set 300 years in the future from the original trilogy- but some of the characters are still alive and kicking in one way or another. The other characters are known as legends or gods, and they are referenced from time to time. This trilogy focuses on new characters but it definitely picks up where the first one left off, and uses the same system of magic- which we learn much more about. It also gives us a nice sense of dramatic irony at times- we know things about our characters’ history that they don’t know (yet)! Definitely don’t read this series without first reading the original trilogy though, it will be confusing, dark, and full of spoilers.

If you don’t want to commit to a 3-10 book series right now, or at least not until you trust the author, try reading Elantris. Elantris was the first novel that Sanderson wrote that takes place in the Cosmere, and it’s definitely enough to draw you in on its own.

Elantris shows more of a mystery than many of Sanderson’s other books! It takes place in the city of Elantris — which is run by a force called the Dor that once “chose” people and gave them divine powers, but in the past ten years have, instead, chosen people to become incredibly sick. Throughout the book, we get different characters’ point of view to determine what happened in Elantris ten years ago, and what does that mean for the characters in the novel.

Unlike Vin from Mistborn, Sarene, our protagonist in Elantris is not a warrior, but shows her strength instead through intelligence, political wrangling, and social manipulation. Sarene is the Sansa to Vin’s Arya, one might say. There are tons of political maneuvers by Sarene, her allies, and her enemies in Elantris, which can teach us a lot about government and PR. If you’re into economics, politics, and outmaneuvering your rivals, you’ll love Elantris.

Sanderson writes another wonderful romance in Elantris, between two characters who have met before, but don’t realize it because one or both are under disguise. Sanderson’s romances are always amazing, and the relationship in this book is no different.

This is just an opinion but Warbreaker is a lot like Elantris, only a whole lot better. Brandon Sanderson has said that he wrote Warbreaker thinking of what would have happened when the city of Elantris was in its heyday. Although it takes place on a different planet in the cosmere, it certainly draws from a lot of the same themes as Elantris, it takes place in a city of Gods, and one of the protagonists is a woman who was sent to the city marry a prince/King from a smaller kingdom. There’s also lots of romance, politics, and religious skepticism.

The magic in Warbreaker is one of my favorites. It’s based on a system called BioChromatic Breath- which is essentially a human’s life force, which can be manipulated for various things. There are also “undead” god types called the “Returned,” who have special abilities, and people who can use Breath to become immortal. The system is complex but its explained well and its easy to comprehend, and it’s a really cool concept.

The city of Hallendren is described in such an articulate way- full of colors and life. The characters themselves are described in colorful ways, and it’s so easy to create a beautiful image in your head of this world. Heck, even the cover art for this book is pretty gorgeous. There aren’t talks of this book becoming a movie or game yet, but I would love to see it happen.

Warbreaker follows two sisters who are very different and hold very different purposes and futures in the eyes of their parents, but the story shows them both leaving their home kingdom for the first time by themselves, and discovering who they truly are. We get a coming of age story from two different perspectives, as they both go through the trials of discovering their identity, their femininity, their trust in others, and defying their parent’s expectations. If you like books about growing up and finding yourself, you’ll really like Warbreaker too.

’nuff said, because, well, spoilers. But there are lots and they are great.

The Stormlight Archive, Books 1-3: The Way of Kings, Words of Radiance, Oathbringer
$25.58
Buy it on Amazon

It’s no secret that The Stormlight Archive is a much bigger commitment than any of the other Cosmere stories. The first book in the series, Way of Kings comes in at a whopping 1000 pages, and its two sequels have even more. There are currently three books written, as well as a short story included in Sanderson’s collection of short stories, Arcanum Unbounded. If you like long, Epic fantasy series like A Song of Ice and Fire and The Wheel of Time (which was actually finished by Brandon Sanderson after Robert Jordan’s death), you’ll love The Stormlight Archive.

If you liked Warbreaker, you should certainly read The Stormlight Archive, because a few of our favorite characters from Warbreaker turn up in Words of Radiance.

For more information on The Stormlight Archive, check out our article about it.

In general, the Cosmere series really has something to offer for everyone, fantasy fans and general literature fans alike. No matter where you choose to start, we can guarantee it will be very difficult to stop!

Previous articleGhostbusters Monopoly (Second Edition)
Next articleBatman: The Dark Knight Returns Cowl
Christine Petit
Christine is a psychologist residing in New York City. Her nerdy interests include Game of Thrones, other escapist television, Brandon Sanderson, Magic: The Gathering, the Marvel Cinematic Universe, complicated board games, and pretty much anything involving dragons or convoluted time travel. In addition, Christine is a singer involved in numerous projects in the five boroughs. She is the mother of two feline friends, aptly named Katleesi & Jon Snow.