Announced back in E3 2017, Age of Empires is finally getting a major makeover in the form of a Definitive Edition. It will be arriving on PC come February 20, 2018. If you absolutely cannot wait until then, the developers are also holding a multiplayer beta. It starts January 29th and will be open to players worldwide. It is entirely free, so sign up now with the link below to the Age of Empires website. 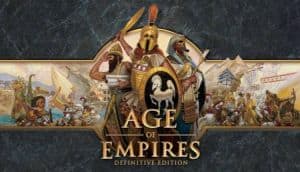 Updates to Age of Empires include meticulously re-recorded audio, a brand new orchestral score, 4K graphics for those PCs that are capable, full campaign narration, and a custom campaign creator. The latter can be shared online at the game’s website.

There are plenty more gameplay fixes and additions to bring the game up to speed with current technology. For example, minimaps and in-game tech trees will make playing Age of Empires much smoother and easier than it was 20 years back.

Most importantly, there is no need to gather your friends into one room to play together unless you really want to. Now you can play Age of Empires together through Xbox Live. This is but one of the many updates that are included more current technologies that did not exist in 1997.

The game is priced at $19.99 USD, a perfectly reasonable price for such a historical game. Age of Empires was one of the first real-time strategy games back in the day. The series has always been the foray into fair RTS gameplay and well executed historical themes. Age of Empires came long before Assassin’s Creed recreated long-dead cities and civilizations. In fact, after the original game’s release, Age of Empires sold over three million unit in only three years.

Are you glad to see Age of Empires updated? Do you think any of the changes will be negative, too far deviated from the original? Let us know your thoughts in the comments below.