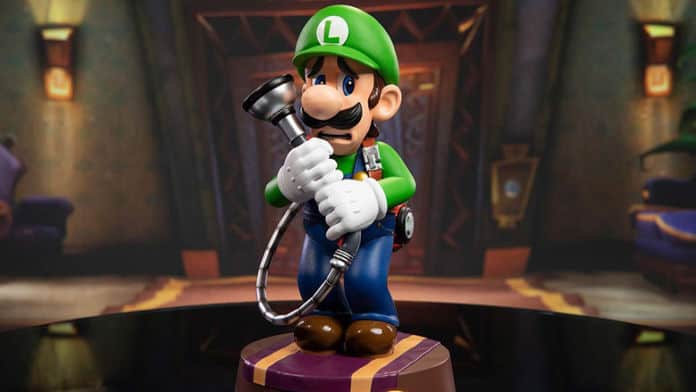 Poor Luigi is at it again, scouring haunted mansions and spooky environments to rescue his friends from the dastardly King Boo! As depicted with this 9”-tall statue, he’s as brave as ever!

Clutching Professor E. Gadd’s Poltergust G-00, the green-clad hero of the Mushroom Kingdom is as timid as ever. An impressive amount of detail showcases Luigi’s frightened facial expression as he cowers in his brown shoes. On his back, he sports the professor’s bulky ghost vacuum, which features a clear canister full of green goo.

Luigi has survived through 2 haunting adventures so far, and this limited edition statue marks his 3rd return to the spookier side of the Super Mario Bros. universe. Tricked into letting their guard down at the Last Resort hotel, King Boo captures Mario, Princess Peach, and some Toads. Luigi escapes the specter’s grasp and is aided by the zany professor, Polterpup, and a green goo doppelganger named Gooigi.

Luigi’s Mansion 3 is a Nintendo Switch exclusive and features a co-operative story mode or 8-player competitive multiplayer mode. The detailed statue marks the release of Luigi’s return to the Luigi’s Mansion series after a 6-year hiatus from 2013’s Luigi’s Mansion: Dark Moon.

Don’t be surprised if this statue vanishes with the creak of a floorboard, though. Let’s face it. Luigi has never been known for his bravado. That was always Mario’s schtick.