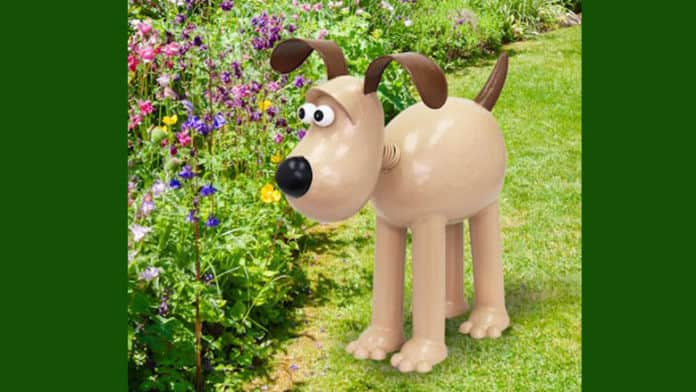 Buy it at What on Earth

Bring home a piece of British comedy with this Gromit Garden Sculpture. The expertly detailed statue looks as if it was pulled right out of your favorite stop motion claymation series. Wallace’s puppy pal, Gromit, may be a silent companion, but as you’ll find with this statue, he’s still a great friend to have at your side.

Overseeing what’s going on in your garden, the Gromit Garden Sculpture is silently keeping away any of nature’s riff-raff. Measuring 17 ¾” x 10 ¾” x 17”, the statue is a sizable piece for the garden of anyone willing to care for this silent but loyal pup. He brings with him a sort of quiet intelligence, earned through his time at Dogwarts University.

The statue is made from a weathersafe metal that will ensure Gromit retains his clean and clay-like appearance. His ears, eyes, nose, and tail are detailed to perfectly match the pup’s appearance in Nick Park’s Wallace and Gromit comedy series. The detailed sculpture will make you feel like you’ve jumped into a Wallace and Gromit special.

He may not have Wallace at his side, but Gromit is sure to become one of your closest companions. Just be sure to visit him every so often in the garden. Though he can stare at the flowers for days, he certainly doesn’t mind a break and some attention every now and again.

The Gromit Garden Sculpture is the perfect backyard or porch piece for fans of the Wallace and Gromit series. It’s even better if you occasionally cosplay as Wallace and grab a few pictures with your new canine friend.